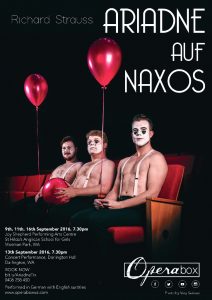 Celebrating 100 years since this sparkling gem of the Richard Strauss operatic repertoire was premiered, OperaBox presents Ariadne auf Naxos from 9-16th September 2016 for the first time in WA with orchestra.

A clever combination of comedy and tragic opera, Ariadne auf Naxos tells a story of the competition between high art and popular art.  Artists on each side fight for their work in a hilarious prologue and we ultimately enjoy the beauty of both as they are performed simultaneously in an ‘opera within the opera’.

This exciting new production is created by OperaBox’s finest ever design team led by award-winning theatre director Kathryn Osborne, “one of our best young theatre directors” (The West Australian).  Osborne said “Ariadne auf Naxos is a rich opera for a director. Combining the aesthetics of high art and popular art and allowing them to sing together is what’s beautiful about both the music and what I’m most excited about in what will be a modern staging.”

Ariadne auf Naxos will be conducted by the magnetic Christopher Dragon, currently Associate Conductor at Colorado Symphony Orchestra (USA), and former Assistant Conductor at the West Australian Symphony Orchestra (WASO).  “Ariadne auf Naxos is OperaBox’s most ambitious production to date matched by our strongest ever team. It’s ambitious not because it has an opera within an opera (similar to the movie Inception) but because of the complexity of the music of Richard Strauss” said Dragon.  “This unique opera does not utilize his gigantic orchestral sized forces but instead an ensemble of 34 musicians.”

2015 Herald Sun Aria Winner, Melbourne-based soprano Fiona Jopson will make her role debut and WA debut in the title role of Ariadne and Prima Donna and one of Australasia’s most outstanding and popular tenors Henry Choo, will return to the role of Bacchus after his debut earlier this year in Melbourne.  Limelight Magazine hailed, “Henry Choo’s Bacchus was, for my money at least, the greatest discovery of the evening. A robust yet pliant tenor who displayed both power and restraint, Choo’s regal gait perfectly match the nobility of portraying this Greek deity.”  The rest of the cast is completed with some of Perth’s best operatic talent in their role debuts including Jenna Robertson as Zerbinetta, Eva-Marie Middleton as The Composer, Michael Heap as The Music Master, Kristin Bowtell, Simon Wood, Charles Bogle, Ry Charleson, Christina The, Alexandra Bak, Belinda Cox and Nick Maclaine in the speaking role of Der Haushofmeister.

With this dynamic and incredibly talented team and rare opportunity to hear such a great operatic piece, you’d be crazy to miss it!  The opera will be performed in German with English surtitles.

“Those of us privileged to be among the audience witnessed an exuberant and thoroughly professional production…The passion and vivacity of the company will continue to fascinate well after memories of some productions in Australia’s premier opera houses have faded.”  Darlington Review

“OperaBox (as a production house for opera in WA) once again proved, by this production, that they have the professional skills and integrity to be a major force for good”  Tony Howes, Capital Radio