Central Australia’s answer to The Buena Vista Social Club, The Song Keepers tells the uplifting story of women from the world’s oldest culture preserving some of the world’s oldest sacred songs, connecting Germany to Indigenous history in the process.

In the central desert region around Hermannsburg, west of Alice Springs, a hidden 140-year musical legacy of ancient Aboriginal languages and German baroque hymns is being preserved by four generations of song women who form the Central Australian Aboriginal Women’s Choir. Singing 14th-century Lutheran hymns – brought to the area by missionaries – in their own western Arrarnta and Pitjantjatjara tongues, the choir’s efforts to save these sacred songs are boosted by the arrival from Melbourne of a charismatic conductor who orchestrates a historic tour of Germany to bring the hymns back to their homeland.

With support from the MIFF Premiere Fund, award-winning filmmaker Naina Sen documented that tour, and its preparations, capturing the highs and lows as these remarkable women share their music and stories of cultural survival, identity and inclusive cross-cultural collaboration with the world. The resulting film is a joyous celebration. 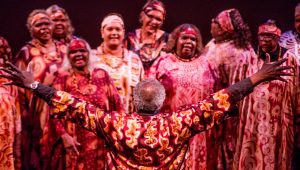