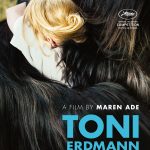 The Perth International Arts Festival brings to you a German film as part of the Lotterywest Festival Films: The award winning
“Toni Erdmann” by Maren Ade

“One of the most stirring cinematic experiences to come around in a long time.”
The Film Stage

See the PIAF 2017 website for ticketing and further information