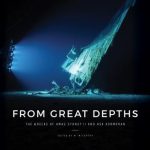 The 19th November 2016 marked the 75th anniversary of the sinking of the Australian ship HMAS Sydney II and German ship HSK Kormoran. Considered one of the world’s most significant war mysteries it is also Australia’s single largest naval disaster. An expedition led by Curtin University and the WA Museum visually documents the ship wreck sites bringing what lies 2500 meters deep beneath the waves to light for all to see. The result of this expedition culminate in a fascinating exhibition at the Geraldton annex of the WA Museum entitled “From Great Depths”.

The Honorary Consul of the Federal Republic of German, Mr Torsten Ketelsen, presented a speech at the opening of the exhibition at the Geraldton Museum and launch of the commemorative book “From Great Depths; the Wrecks of HMAS Sydney II and HSK Kormoran”

A copy of the speech is attached.